The Nexus One Clone

HTC Desire: The Nexus One Clone - HTC has introduced a new smartphone that is almost the same as the Google Nexus One in terms of design and hardware features. The HTC Desire has a lot to be liked about since it has all the qualities of a really powerful and good-looking smartphone. 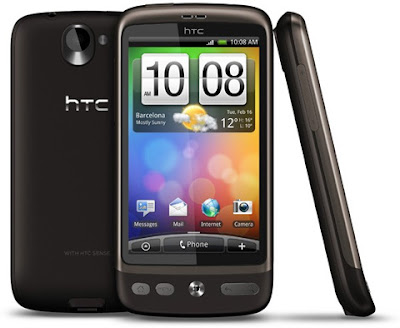 Like the Nexus One, the HTC Desire has a 3.7-inch AMOLED capacitive touchscreen display (800x480 resolution), Qualcomm 1GHz Snapdragon processor, and 5-Megapixel auto-focus camera with LED flash among others. It is also running on Android version 2.1 (Eclair).

While the size and shape of HTC Desire is similar to that of Nexus One, it has a few useful changes like the additional buttons at the bottom and the trackball has been replaced with an optical version.

On the software side of things, the HTC Desire added the Sense UI Android overlay that gives it a lot of enhancements in user interface and functionality. HTC has also created something useful, which they are calling as the Helicopter Mode. --It allows users to simply pinch in on the home screen and see all the seven widget-filled windows at once, which is really handy.