After Softbank announced the HTC Desire and DoCoMo began pushing its very first Android smartphone (Xperia X10), Japan had big hopes for AU's press event today. An EVO perhaps, or maybe something more from this once proud home of the original superphones? Unfortunately, Engadget Japanese let out a collective meh in response to a 5-inch IS01 handheld from Sharp running Android 1.6 on a Snapdragon processor and measuring 83 × 149 × 17.9mm and 227g. 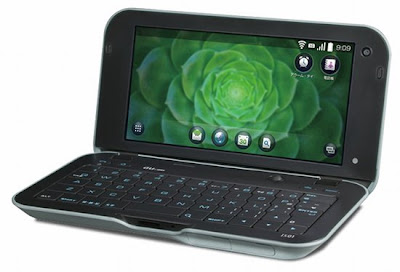 While it looks like the classic Japanese eDictionary, the IS01 is meant to be used as a general purpose MID with a 5-row QWERTY, Sharp-built "New Mobile ASV" multi-touch capacitive display pushing a 960 x 480 pixel resolution and a 5.27 megapixel auto focus camera on back with a 0.43 megapixel jobbie up front for video calls. Rounding out the specs are 802.11 b/g WiFi, Bluetooth 2.1 + EDR, microSD slot, 1Seg mobile TV tuner, IrDA, 4GB of internal storage, and Qualcomm 3G CDMA data. Look for it to ship in October while a developer friendly version (JN-DK01) should be available in May.